By: admin
In: Lens, Move to Full Frame, Reviews
With: 0 Comments

Introduction
In my quest for a new lens / combination of lenses for my Nikon D610, I opted for the ‘prime’ option instead of a zoom.
More on this choice can be found here. My first purchase was a second hand Nikon 85mm f/1.8 AF-D. Actually the ‘older’ type, so not the G version and after some weeks shooting with it I’m ready to write my review / user experience.

On my crop sensor (APS_C) Nikon D90 I loved the 50mm f/1.8 for portraits (giving a equivalent of 75mm) and the closest focal length for a Full Frame body is the Nikon 85mm f/1.8.
This focal length gives me a mild tele range so that I can leave some room between myself and my subject and the main purpose that I have in mind for this lens is shooting portraits.
Also, with 85mm and a maximum aperture of f/1.8 it should be able to give a nice ‘out of focus’ background separating the subject.

The next great  thing about this lens is that it will give decent results in dim light situations, so that my flash can stay in my bag longer.

Occasionally I will use this lens for situations where I am not able to move closer and still want to be able to ‘zoom’ or get some of that ‘compressed’ look that tele lenses give.

Build quality
The 85mm f/1.8 AF-D seems to be pretty solid. It feels good, with most metal on the inside. It certainly feels more a ‘lens’ than the newer version.
The supplied lens hood is all metal, but needs to be screwed on, which takes more time than the newer ‘click on’ type.
Still this old lens hood looks like it can take much more.

Autofocus
The lens won’t autofocus on body’s without an AF motor, since the lens itself does not have one. The AF is fairly quick and, so far,  I have not noticed AF problems (other than missed focus on the larger apertures that can be expected at 85mm).
The minimal focussing distance is 85cm. That is lot, especially comparing it to the 18-200mm that I was used to shoot with.
Since the newer version of this lens is not much better (80cm) I did not bother with that too much when choosing between these two.
Having to use the in body AF motor, the camera does make some noise while using the AF.

The AF-D version does not have a AF/MF switch and no manual override, so you have to move the switch on you’re body to be able to focus manually.
It’s no big deal for me, but the manual override is more convenient in the end (and quicker)
The focus ring turns from 85cm to infinity fairly quickly, making small adjustments somewhat hard. But then again, you can quicly focus as you don’t have to move the ring too much.
The focus ring itself is ok, although not as smooth as with the newer version.
Still it is a lot better than my 50mm AF-D and I have had no problem using it.

General feel
All in all I am pleased with how this lens handles, only finding the minimal focussing distance sometimes too long (as I can’t get close enough for the image I have in mind).
It seems like it can last a long time and the focussing (AF and MF) works fine.

The Nikon 85mm AF-D f/1.8 is a very sharp lens. Especially when stopping down to about f/2.8 I get very sharp results and even shooting wide open I am very pleased with the results. And even at f/2.8 the corners also look sharp (crop from left corner, the right part is in focus) At longer distances I need to stop down to about f/5.6 to get the best results, but usually that is no problem since I don’t need a small depth of field when shooting far away. This lens shows very little distortion and given its main purpose (shooting portraits), this is no problem at all. The Nikon 85mm f/1.8 AF-D has rather mild falloff.
It is visible at f/1.8, although not disturbing.
When stopped down to f/2.8 it gets better and at f/4.0 I don’t have any issues with vignetting. Since I’m using this lens for portraits mostly, I am perfectly happy with this (little) vignetting. The lens takes 62mm filters and I am using a UV filter (not particularly slim), that shows no (extra) vignetting at all.

I found that the Nikon 85mm f/1.8 AF-D can suffer from flare and reflections when shooting into the sun.
Shielding the lens with your hand or the supplied lens hood does solve this problem somewhat, but I think the new version suffers less. 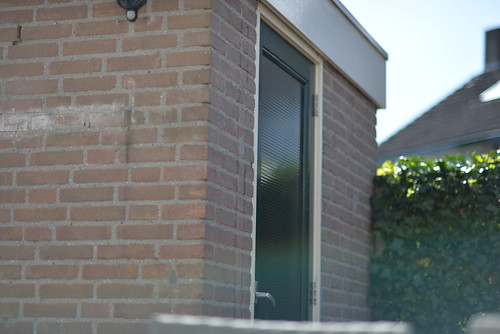 When shooting just below the sun, I get a round reflection in the bottom part. (hover over the image to view the difference)

Having a nine blade diaphragm, it renders nice 18 pointed sunstars when stopped down.

One of the reasons to buy this lens was the ability to render the background out of focus. Combining the mild tele range with a larger maximum aperture.
The look of the ‘bokeh’ is rather nice, although the f/1.4 version of this lens will give better results with more ‘creamy’ bokeh. Still I like the look of the Nikon 85mm f/1.8 AF-D very much and enjoy its ability to separate my subject from the background.

Using AF on the D610 is rather noisy, and, due to the contrast detection method used in Live view, is not advisable while recording.

However, it can be used to get in focus before pressing ‘rec’.

Being used to the Panasonic X900 with excellent image stabilization, I do need to adapt my shooting when shooting with the 85mm. Even when using a tripod, I do get shaky footage when there is wind.

This means I have find places my hands can lean on and ‘live with’ that limitation.

I will try to work with a monopod, but more on that later.

I really like this lens when shooting video since it gets me the ‘look’ that I am after.

Choosing between the AF-D and G version

As a hobby / amateur photographer I did not have the money for the f/1.4 version, and even the G version would set me back an additional € 140,- that I rather save for a good set of UV filters as protection for my expensive glass.

The main difference (in my opinion) between these two lenses is that the G version offers manual override and silent AF. I also think the G version suffers less from reflections and flare. (although I did not test this)
The AF-D however offers a 9 blade diaphragm and more solid built quality.
After some extensive digging online I opted for the AF-D version and so far I did not regret this choice.

Over all I like this lens a lot and use it very often. It has a pleasant look and I even like that look a bit more than my newer lenses.