Introduction
In this review of the Samsung Gear 360, I will tell about my experiences with this nice little 360 camera. The device itself is small. Samsung supplies a little ‘tripod’ so you can hold it in your hand. It feels very solid, but you have to get used to holding it (it is rather small and slippery and top heavy). That being said, holding it might not be the first thing the designers had in mind when they created the Gear 360, since you will always be in the picture when you hold the camera.
The build quality is very good and I have no complaints here.

The few buttons on the Gear 360 allow you to record a picture / start recording video and connect to your (Samsung high end) smartphone as well as change a small set of settings.

The gear 360 was clearly designed to be used with a (high end Samsung) smartphone. You can press the record button / shutter and start recording video / take a picture, but without a connected smartphone you miss most of the settings that you need to get the best results out of the Gear 360.

As I own an iPhone, I don’t have this option (so far there is no iOS app for the gear 360) and I can only use the Google Streetview App to take pictures via my smartphone.
The Streetview app does not have a settings option, so I was stuck borrowing one from time to time to work out what gave the best results.

I knew about this limitation, but it turned out to be a reason for selling the 360 after some weeks.

The image quality of the Gear 360 is ok. I suspect it is better than most of the other 360 camera’s that are available, but I was not too excited when looking at the images on a HD monitor.

Here you find an example of a video I’ve shot. Don’t mind the dot that is in the frame, I had some damage on one of the front lenses. I did replace it before selling.

The image resolution is just not high enough for a HD monitor (as it only shows a part of the frame).
It is enough for mobile screens but not as usable as I hoped it was.
Also the lack of image stabilization is a big con for me. I don’t know how they have to implement it, but the shaky footage looks rather bad.

And another video, this time with exposure compensation.

On the photography side of the story, I was also not too happy with the outcome.
Sure it is a unique way to capture your surroundings, but the sensor and the lens are not as good as I hoped.
Also the stitching does show in the final image, making for some hard edges. Especially when the subject was a bit closer.
Finally there is a real problem with white balance and exposure. The two images are not exposed the same and the white balance differs in some shots.
Maybe a future update will fix this, but since there is already a new version on the market I doubt this. 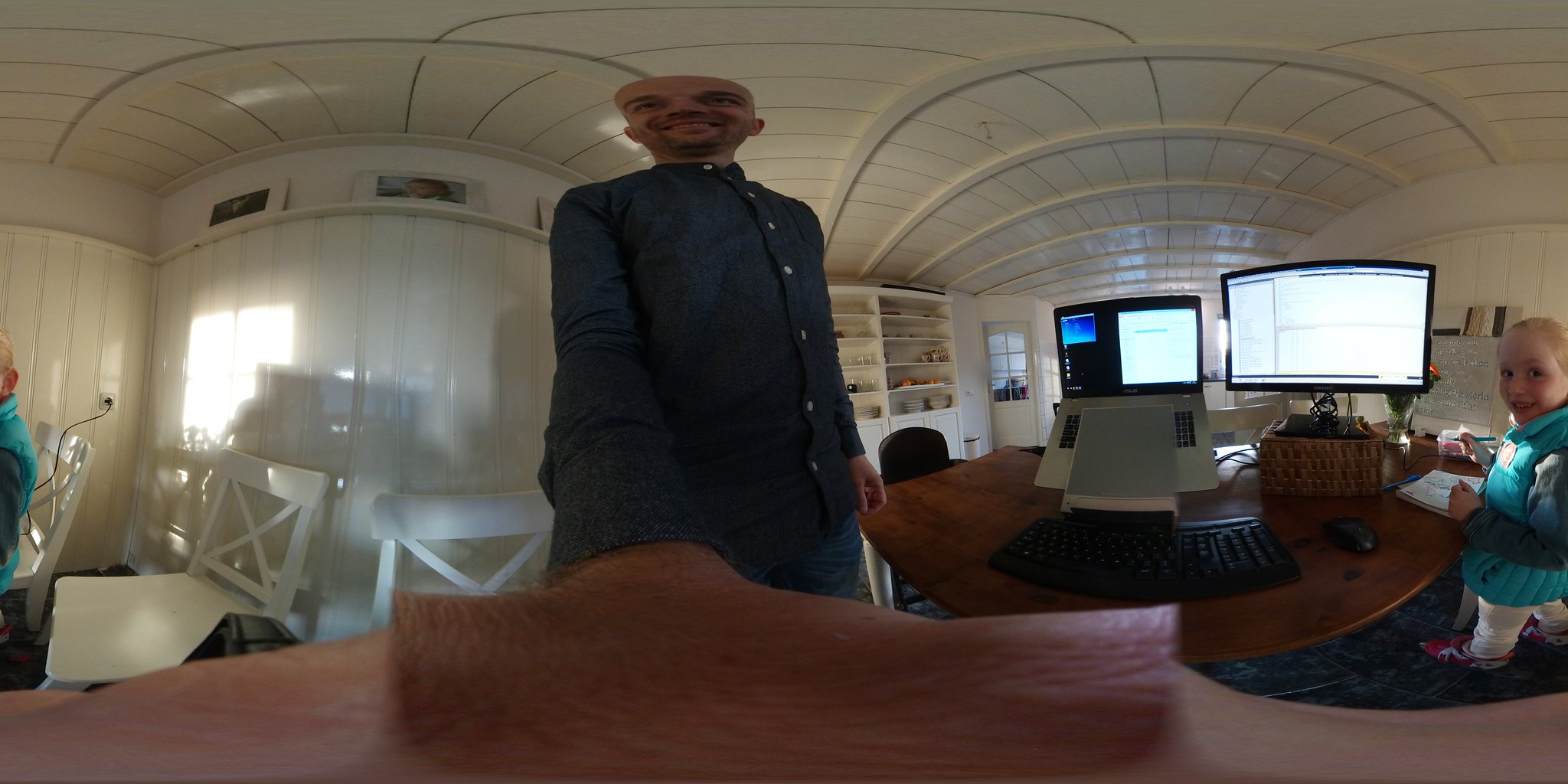 And a pictures posted on Google:

As you can see, it is sure a unique way of showing how something looks and works great for some subjects (as this shop I photographed).

But, the overall image quality is not good enough for me.

Connecting and operating:
Connecting the Gear 360 is very easy and I had no issues with connecting to my iPhone.

Of course the iPhone gave me no possibility to change settings etc, but connecting was not an issue.

I for sure would have liked there to be more settings that could be changed using the camera buttons. Now there is only very limited control without a (Samsung) mobile connected.

I did have some problems connecting my Gear 360 to my PC.
Sometimes it did not recognize it and I had to un install the drivers and re install them.

Samsung ships a version of Action Director to edit your video’s (and to some extent also your pictures).
It has very limited options, but you can do some basic editing to your footage.
I would love to see some kind of digital stabilization, but for that you will need to buy a pro editor.
I had no issues using Action Director and the rendering of video went ok.

As I already wrote, I decided to sell my Gear 360 after repairing it’s front lens.
It was just not good enough for me in most situations and that ment I had limited purpose for it.
Maybe I am spoiled shooting with a modern DSLR and I know that kind of image quality is hard to achieve with a small sensor and very wide lens, but it was just not good enough for me.
Also the stitching showed to much for my liking and the two pictures were sometimes clearly not exposed the same.
Also the white balance varied between the two images.
The video resolution (or detail) was too low for me.

These ‘issues’ made the Gear 360 an expensive toy that I would not use enough.
Maybe in the future I will try the new version but I am a bit sceptical about it.